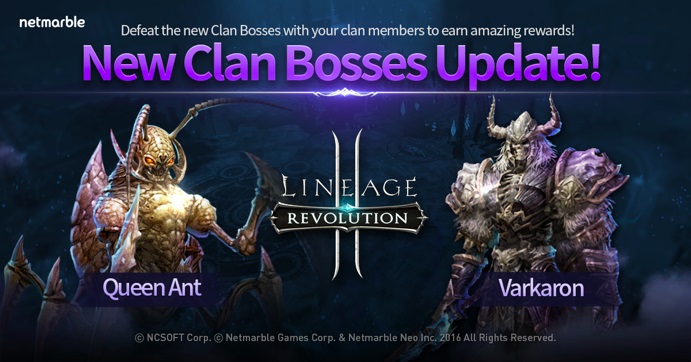 Netmarble announced that its mobile MMORPG Lineage2 Revolution introduced contents including new clan dungeon bosses and an expansion to the Tower of Insolence.

New bosses entering the clan dungeon today are ‘Varkaron’(hard) and the ‘Queen Ant’(easy). Varkaron requires a high level of play difficulty and it is advised for players to be in a party of at least 20 members. When players defeat Varkaron, the clan is rewarded with adenas, small clan coin box, Varkaron box, core and etc., which allows a faster growth of the clan.

The Queen Ant can be played by beginners and with a party of just 5 members. When players defeat the Queen Ant, they can receive the small clan coin box and Queen Ant box.

The ‘Tower of Insolence’ which tests the limit of each player as they defeat monsters on each floor, has been expanded to 70 floors. Players can receive runes that help strengthen their character as they move from floor to floor and defeat stronger monsters.

There will be a player event in Lineage2 Revolution, which will give away in game items including A to S grade equipment box and scroll: enhance accessory, until July 25.

During the same period, there will be a dice event where players roll the dice and receive various items as rewards. Players can roll the dice with points acquired by taking part in various gameplay such as exp. dungeon clear and participation in arena. When each player completes the dice board, additional benefits including Maphr’s Protection and red diamonds can be achieved as additional bonus.